“Once you’re on Inspectorio, it doesn’t stop working for you.” - Jose Martinon, Director of Quality Assurance at Barco Uniforms

Barco Uniforms has created some of the most recognizable healthcare and identity apparel brands over several decades. From their design studio in Los Angeles to their 15 vendors and 33 factories around the globe today, Barco Uniforms maintains a commitment to the highest possible quality for its products.

They’ve also set strict environmental and sustainability standards for themselves. As a result, they have a sizable amount of quality and compliance to manage.

We interviewed Barco’s Jose Martinon and Griselda Ledesma on how Inspectorio’s solutions have changed their quality and compliance operations.

About Jose Martinon and Griselda Ledesma

Griselda Ledesma serves as Barco’s Compliance Specialist. Over several years, she has strengthened Barco’s compliance operations through the pandemic and ongoing government regulations, a task made easier using Inspectorio Rise.

Before Inspectorio: problems to solve

Martinon first discovered Inspectorio in 2019 while searching for an inspection platform. Barco also considered another platform that offered digitized audits but focused primarily on checklists. Barco was also looking for analytical capability in the software to obtain the level of visibility they needed for quality inspections. 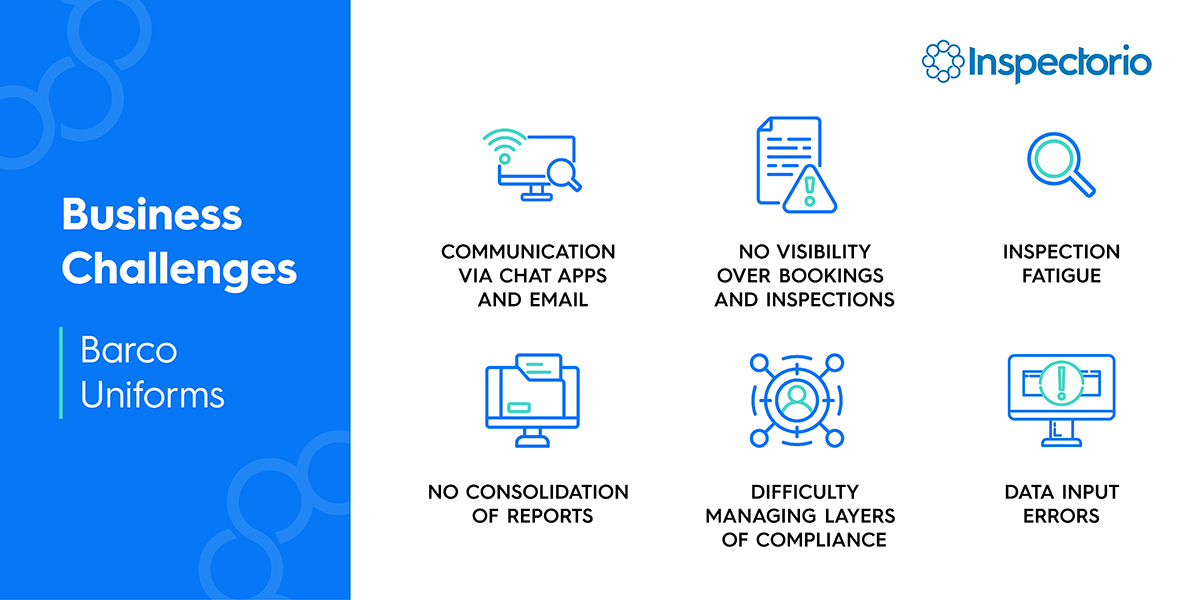 For Martinon, who started his career as a Quality Control (QC) auditor writing reports with pen and paper, the biggest problem to solve was how to reduce manual processes to increase visibility.

Before Inspectorio, factories communicated with Barco Uniforms’ inspectors through various chat apps.  “I didn’t have visibility over bookings,” Martinon says. “It wasn’t real-time. The only visibility I had was when they’d upload their report and send it through email. And that usually came at least a week after the inspection. It was very manual.”

For Ledesma, the primary issues were “the consolidation of reports and maintaining the level of compliance required across the supply chain.” She explains that Barco manages compliance across many different areas such as environmental, social, labor, and importer security.

Without a platform solution, it was difficult to see quality and compliance side by side. Other activities like creating questionnaires, customizing Barco’s own types of audits for different products, and creating assessments based on their code of conduct were also time-consuming.

Ledesma says that “COVID-19 has pushed so many changes really quickly, and many organizations are having trouble moving fast enough.” Being able to remain agile to respond to these changes while capturing information is crucial.

Martinon and Ledesma set out to solve these issues by migrating to the Inspectorio platform.

Martinon reports that his QC auditors were reluctant at first: “There’s always the fear of something new, a fear that you’ll ‘break’ it. But Inspectorio gives you an Account Manager and the training to be successful. You’re not alone.”

Ledesma agrees that Inspectorio’s customer support has been exceptional.

“I’ve been at the forefront of a lot of product launch software applications, and absolutely none compare to what Inspectorio has done.”

What got QC auditors over their initial reservations? Martinon says it was the moment they realized how much easier their jobs had become:

“When QC auditors found out they had more information than [what was] in a WhatsApp message with the POs and quantity, they realized they had all the information they needed before going to the factory,” he says. “There’s visibility and traceability. For defect classification, it doesn’t matter the language — the defect code is the defect code. Inspections used to take a week. Now the inspectors can return home and rest once they leave the factory; the work is done.”

After Inspectorio: the changes 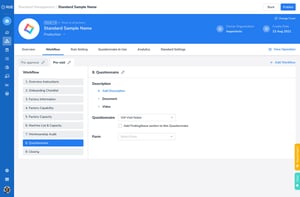 Inspectorio Rise has given Ledesma and her team the ability to create custom questionnaires, audits, and assessments, and to implement them quickly. It is now easy to compare quality and compliance side by side.

Ledesma’s favorite feature of Inspectorio Rise has been the ability to pull from all available COVID standards, which has allowed her to demonstrate progress both internally and externally.

She has also leveraged the ability to create and curate standards, and to customize Barco’s scoring and guides depending on workflow. “This is great for compliance because it makes it easier to pivot, and because I can just create it myself. I don’t have to wait for someone else to come up with it. Plus, I can compare analytics side by side.”

For Martinon, having access to accurate and digestible data, and being able to see dashboards with inspection results and areas to improve has been his favorite feature.

“I love the visibility of knowing where the factories are, how they're performing, and being able to demonstrate facts through data. Before it was based on emotions; I had no numbers to back it up.”

Both Ledesma and Martinon emphasize that having objective data and analytics has been one of the most useful features in streamlining their workloads.

Martinon says Barco has seen significant improvement from their pre-Inspectorio rates of 80% pass and 20% rejection. By activating self-inspections, factories now work to Barco’s quality standards instead of their own — and these standards are the same across different factories and inspectors.

Inspectorio Sight’s prediction algorithm ensures that previous defects will get caught regardless of who performs the inspection. Martinon also now has the capacity to help QC auditors when they are abroad. 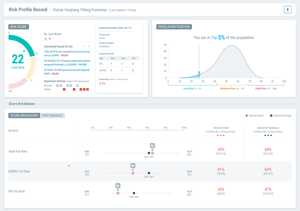 Adopting Inspectorio has benefited Barco by forcing the adoption of compliance standards, says Ledesma. “Inspectorio has forced us to make subjective things objective. It couldn’t have happened without this platform.” Additionally, it has allowed her to curate, send out, and get a response on standards to demonstrate due diligence. 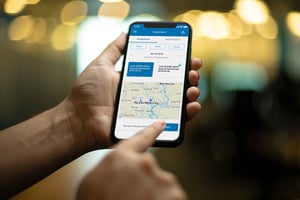 Mobile accessibility is “vital,” according to Ledesma. “It’s a pillar of our success. It’s accessible and easy, and you can complete work offline.”

Ledesma sees Inspectorio being used as a cross-training platform. “QC auditors are now being cross-trained into compliance,” she says. “Rise is going to be the backbone of a big upcoming training operation to train auditors on social, environmental, and labor compliance.”

Without the consistency and uniformity of Inspectorio, there would be no way to undertake such training.

Martinon and Ledesma’s recommendation to others

“‘What are you waiting for?’ would be the response,” says Ledesma. “This is the way to go.”

Brands and retailers need to be able to demonstrate quality and compliance side by side. Consumers want to know that their product is high-quality and how it was made. Inspectorio lets you demonstrate that level of due diligence across all avenues.

“Doing it in a way that is quantifiable, and objective is going to be very important, says Ledesma. “Don’t wait. The sooner the better. If we had known, we would have adopted this years ago when Jose was first advocating for it.”

“The platform is flexible, and you can customize it to your standards and specifications,” says Martinon. “Once you’re on Inspectorio, it doesn’t stop working for you.”

Take your quality and compliance to the next level

Inspectorio provides the analytics and level of visibility to take control over activities across a global supply chain and share information that is readily available with key stakeholders. When it comes to quality and compliance, there is not a one-size-fits-all, and technology can help you customize workflows to include different rules and standards to better manage your operations.

Next Post What is a Time and Action Calendar?

Assess Performance at the Facility Level with Organization Analytics 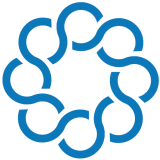 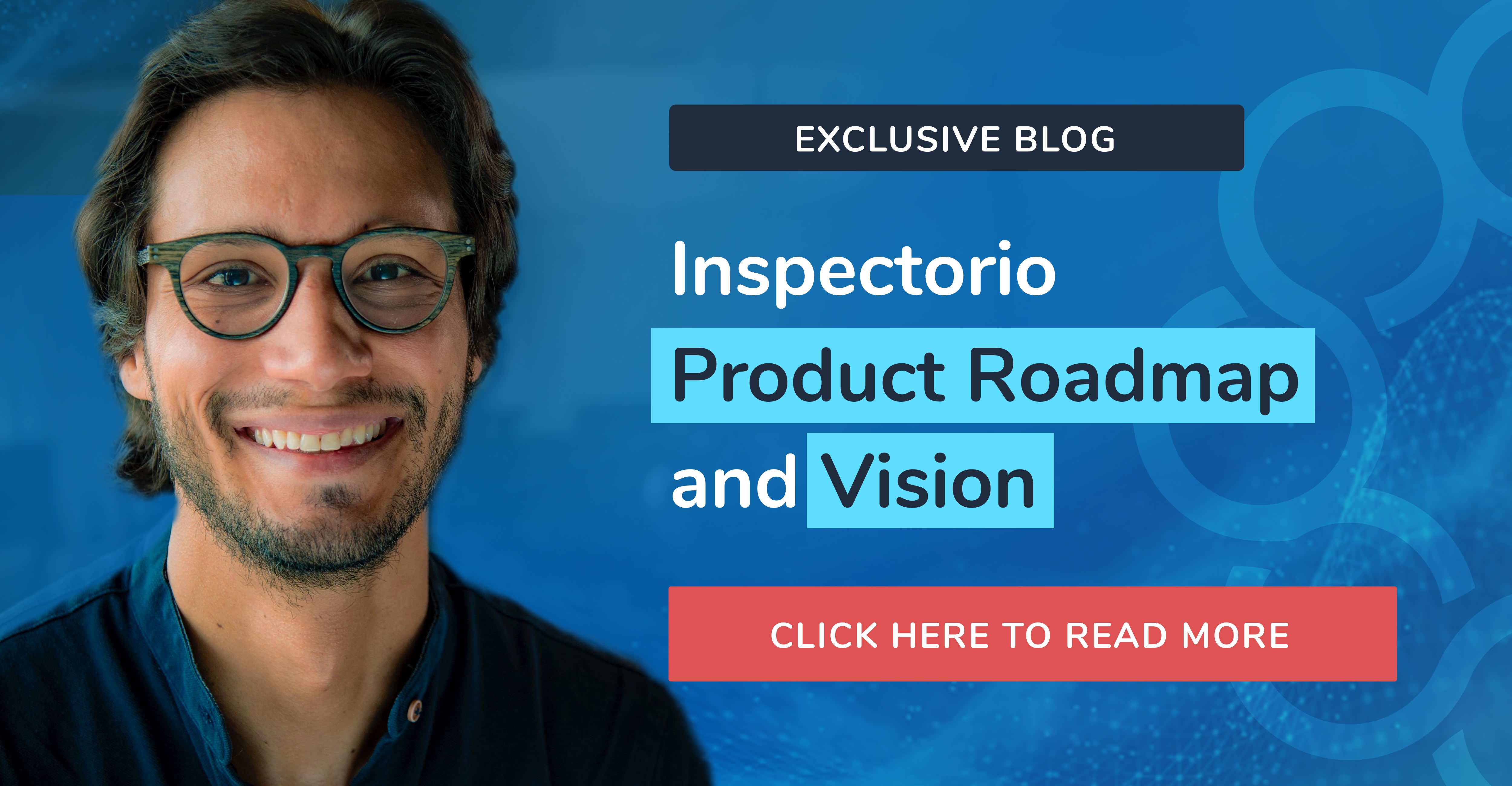 The Inspectorio Roadmap: Our Vision and Product Pipeline 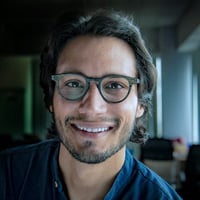